The funding period of the GREEEN network has come to an end. 30th November 2017 is the official end of the project … but no worries … the GREEEN Network will continue. You will still find new posts on our Facebook page, the website will stay available with our newsletters, project leaflet and the guide on climate change education. You will still be able to access the GREEENHOUSE and use the materials and information on climate change provided by all GREEEN partners and by our new partners. So you can still join the Network and register now: 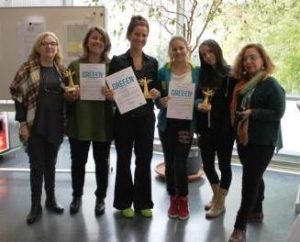 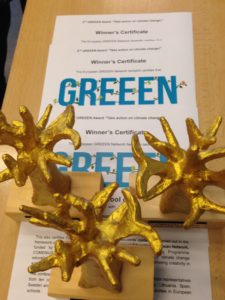 In the second GREEEN award the task was to describe projects or ideas that would illustrate actions, their key outcomes, and their success in meeting the climate change challenge locally.
From the more than 50 submitted projects the European jury and the public vote decided on the three winners.
And the winner are: END_OF_DOCUMENT_TOKEN_TO_BE_REPLACED

The GREEEN Network invites you to its final conference that will take place on October 10th, 2016, in the premises of the Landkreis Kassel. You will have the chance to meet the representatives of all 16 partner institutions from 12 European countries that have been involved in the project and learn about GREEEN activities and future plans.

The GREEENWORK has the pleasure to announce its final conference on 10th of October, 2016, in Kassel, Germany. Interested people from all over Europe are welcome!
We are setting up an intersting programme with different kinds of acitivities such as workshops, excercises, a climate walk through Kassel, networking talks, a panel discussion with experts from Europe …. and last but not least the award ceremony.

The conference programme will be published soon.

Take action on climate change and make a difference! 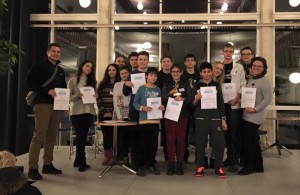 After the successful European storytelling award with a wonderful award ceremony in Stockholm, the GREEEN team is happy to announce the second GREEEN school award.

The GREEEN team is inviting European school students (14-19 years old) to show us their projects and ideas that contribute to this momentum for change. We are looking forward to seeing young people’s innovation, and the climate change solutions they are developing in their schools or communities.

The best projects will be invited to our final conference in October 2016, in Kassel, Germany.

And the winners are …

The GREEEN storytelling award was a success! More than 55 creative stories have been submitted. From these the jury members made a pre-selection of ten stories that were published on the GREEEN Facebook page for the public to cast their vote for the three eventual winners – the number of likes had to decide on the winning stories. The teams had eight days to make sure that they would be among these.

On January 1st, 2016, the jury nominated the four winners:

Please click on the respective thumbnail to watch the story!

Looking forward to your stories!
Your GREEEN Award team

Imagine…
A hundred years from now human life on earth is sustainable and in balance with the biosphere. How was this achieved by mankind? Imagine that something revolutionary happens in our time that will eventually save our planet. What was this great change?
We want you to imagine you live in the future and tell people the story on how the battle against climate change was finally won.

Tell us your story in a film! – Find out more.