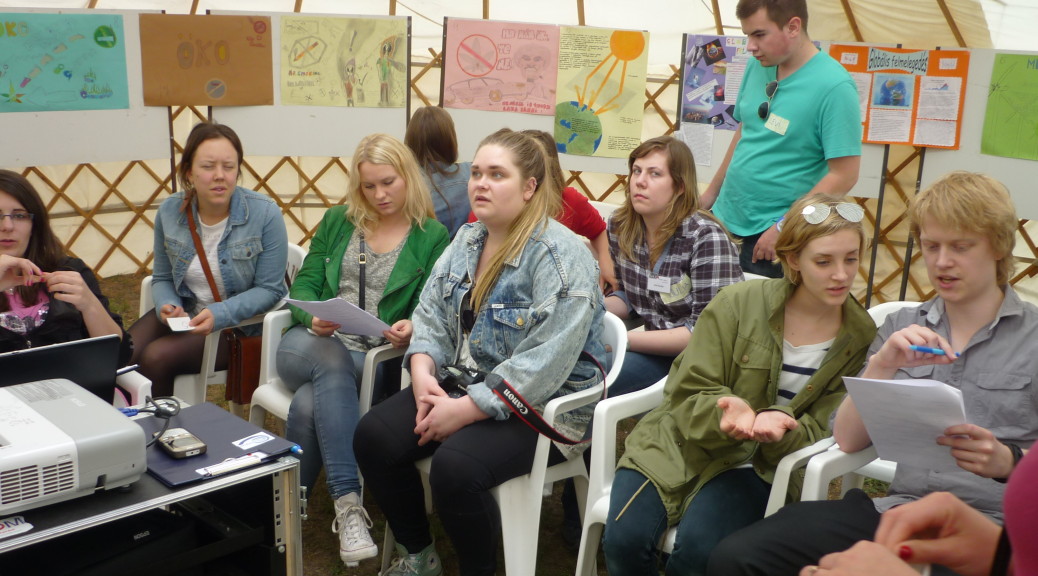 Events carried out by or with the involvement of the GREEEN network partners:

Final meeting in Kassel on 11./12.10.2016: During this meeting the partners finalised the GREEEN guide and set up a policy paper providing guidelines on how climate change education can be implemented sustainably into school curricula. It addresses educational developers and decision makers.

Final conference in Kassel on 10.10.2016: Apart from the award ceremony, the conference offered insights in the GREEEN network activities and its main outputs and offered a series of workshops on climate change related topics. Online conference  on 19.09.2016:  How to engage with us? What do we offer and what do you bring in? With GREEEN coming to an end the online conference served to hightlight the services provided  by GREEEN also after the funding period.

GREEEN award workshop: On 06.06.2016 during the final conference of the THREE C project a workshop for students was organised to gather ideas for the GREEEN award.  Find the conference documentation here.

5.05.2016 “Smart Mayor”: 18 students from Aizputes secondary school took part in a simulation game on climate change adaption: they had to put themselves into the shoes of a mayor of a European municipality and had to plan their municipal budget to protect their citizens from the consequences of climate change. Find out more.

4th Partner meeting in Stockholm on 23./24.02.2016: During the meeting the partners further devloped the GREEEN guide on climate change education and planned  the second European school award.

Award ceremony on 22.02.2016 : Winners of the GREEEN Storytelling Award 2015 were celebrated during the 2-day event in Stockholm. The event was attended by more than 80 people from European schools and environmental organisations.

3rd Training day on 22./23.02.2016 in Stockholm: Those days were really busy – we had the training day with lectures and workshops provided by students, the award ceremony and the partner meeting. The training days were followed by a 1-day forum on the question how to end the epoch of antropocene. Webinar on 16.02.2016: What are the principles of Fair Trade and what can schools do with it? This was the topic of our 7th webinar that was provided by the coordinator of the Fair Share project. Find out more.

Great dissemination event “The climate change” on 26.11.15 in the Municipality of CHAIDARI organised by OIKOPOLIS, FRIENDS OF NATURE, O.C.E.A.N  and the responsible person of two educational directorates.
.

Webinar on 17.11.2015:  On the road to Paris – COP21
The webinar explored the UN-driven process to reach a legally binding agreement, discusses progress to date, and presents possible future scenarios emerging from the meeting in Paris. The webinar was followed by a 1-day moderated discussion forum.

Webinar on 25.06.2015: How to use Edmodo for learning and networking purposes?  In this webinar Ömer Delialioğlu and İbrahim Hakkı Bulut from METU University will inform on the characteristics of EDMODO.

Day on waste materials on 28.05.2015 in Dabas: Students of primary and secondary schools could learn about climate change mitigation and environmental protection throughout interactive tasks, competitions and games.

GREEENHOUSE presentation on 28.05.2015 during the pilot course of the ThreeC project on circular economy in schools with 30 teachers and ThreeC project members.

Marathon relay race on 17.05.2015: Climate Change – We care! This was the motto of the GREEEN team consisting of GREEEN partners + the member of the European Parliament, Martina Werner that took part in the race. Great team spirit!

Events in Greece on 08./12.05.15 organised by 3rd Junior High School of Aigaleo who worked in the environmental project “Actions for the restriction of human intervention and prevention of the greenhouse effect”. GREEEN at “Monumenti Aperti” on 09./10.05.15: Students of our Italian partner school showed visitors the Museum of Farming Culture and demonstrated lab activities of its sciences department –  good opportunity to promote the GREEEN Network. Find out more.

National event in Latvia by Aizputes Secondary School on 08.05.2015: The event brought together several schools and the National Education Centre. After two lectures students went out for practical outdoor activities. Find out more here.

3rd Partner meeting in Ankara on 20./21.04.2015: This meeting focussed on the development of the guide on CE and the European school award on climate change.

Training day on 21.04.2015 in Ankara: Effects and drivers of climate change and what educational institutions can actually do to induce behavioural changes. Presentations of four Ankara-based schools on what they have done.

On 20.03.15 HAK 1 Wels organised a day dedicated to experiments related to CO2 emissions and climate protection. Students of the GREEEN partner school invited local schools to take part in experiments and get to know GREEEN.

Webinar on 10.03.2015: Circular economy in schools – what is circular economy and what can you do with it at schools? Exchange with the experts from the EU-funded project Three C – Creating Competences for a Circular Economy in Schools.

Regional event on 09.03.15: Eco-schools from Hesse met for a training day on how to implement climate change related topics in their lessons.  Article in German. 12.01.15 and 16.02.15:  Workshop on climate change related topics with 24 students and one teacher in Lyceum Petroupolis, Athens organised with the GREEEN member OCEAN.

Webinar on 10.02.2015: GREEEN Network – How to engage with us? What do we offer and what do you bring in?
Approx. 25 participants took part in the webinar. More details here.

Sabine (BUPNET) was invited to represent GREEEN in the panel discussion during the 1st conference of the network eSchools4s on 27.10.14 in Esslingen, Germany.

Climate Change – how to approach the topic on school level?
This was the question that was in the centre of the training day carried out in Madrid on 30.09.14 in Madrid. Find out more.

2nd Partner meeting in Madrid on 29./30.09.2014: The GREEEN network partners met to plan their subsequent activities. Moreover,  all partners set up their e-portfolio on GREEENHOUSE.

GREEEN at BiciMiPiaci
In Sardinia a group of students of Duca degli Abruzzi, together with their teachers joined the BiciMiPiaci bike tour.  They  promoted the GREEEN network and the possibility to become members. Read more.

The Baltic sea connects!
GREEEN was represented in the summer camp in Estonia in the framework of the Baltic Sea Project by students and teachers from the Aizputes secondary school. Read more.

Online conference on 20.05.2014 with representative of Comenius Network eSchool4S: The meeting aimed to exchange on project activities and to identify potential fields of collaboration and synergies.